I just finished reading an article in the Huffington Post about how the next leader of our country should have a complete social media strategy. Author Daniel Burrus explains that President Obama used to social media to “gain momentum and the votes he needed,” and that Republican candidates should do the same. For the most part, the candidates have a good online presence already. For example, Mitt Romney has more than 1.4 million Facebook fans. However, he has only 324,000 followers on Twitter and even fewer subscribers on YouTube.

Burrus points out that although the Republican candidates are using social media, some are better than others at certain sites. He wrote that social media is always changing the staying power of a candidate will depend on how well-rounded they are in the social media world. In this case, he suggests that candidates use all of the social media equally, including Facebook, Twitter, YouTube, FourSquare, Reddit, LinkedIn and others. 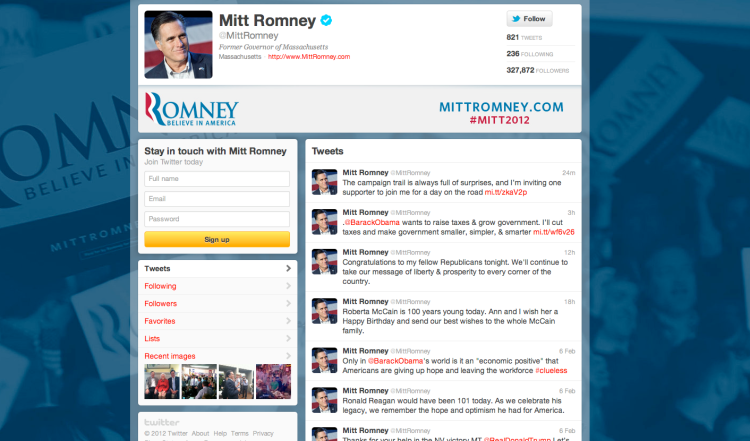 But is this true? Romney’s updates on Twitter seem to be consistent. Could his lack of followers be from lack of interest instead of his lack of presence?

Romney has a great following on Facebook, and like his pages on other social media sites, there are plenty of apps, which are easy to navigate. Burrus writes that Facebook is the leader in social media. So what is wrong with having the most followers on Facebook? Sure, technology always changes, and if Romney would have been on just MySpace, his campaign wouldn’t be so successful. But I think the people working on his campaign are smarter than that. They, like all of us, will be able to see when Facebook is phased out. And in the next year, I hardly doubt it will be.

A lot of people on the Internet use multiple social media platforms, so if a person “likes” him on Facebook and doesn’t follow him on Twitter, they will still get his updates and information. I don’t think a candidates has to be a social media master to be successful, but they  definitely have to have a strong presence in a few areas of the social media-sphere.